The spiral Starbars are made of special high-density reaction-bonded silicon carbide. A spiral slot in the hot zone reduces the cross sectional area. This provides the electrical resistance ratio to make the ends cool and the hot zone hot. Special cold ends may be welded to further enhance the resistance ratio. To provide a low resistance contact surface the extremities are metallized with aluminum. The electrical connections are made with flat aluminum braids and spring clamps. The terminal ends of the SE element are normally plugged.

In an air or inert atmosphere of argon or helium the SE and TSE Starbars can be operated at furnace temperatures up to 3000ºF (1650ºC). In reducing atmospheres the maximum operating temperature is 2500ºF (1371ºC). See Watt Loading Graph, Figure 1.

There is a protective coating of silicon dioxide on the silicon carbide. Hydrogen reduces this coating and causes the Starbar to deteriorate. Very dry or very wet hydrogen is detrimental to long service life. Nitrogen atmosphere applications are limited to 2500ºF (1370ºC) and a maximum watt loading of 20 to 30 watts per square inch (3.1 to 4.6 watts per square centimeter). Too high of a surface temperature will result in silicon nitride formation. A thermally insulative layer forms around the Starbar resulting in very high surface temperatures which damage the Starbars. At 2.7 gms/cc, this high-density low-porosity element is able to survive severe environments. The high density prevents the internal lattice structure from being oxidized. This Starbar has an extremely slow aging characteristic. Starbars can be replaced while the furnace is at operating temperature. The power to the Starbars being changed should be shut off, the spring clips and aluminum braid released, and the old Starbar removed. The new Starbar should be inserted smoothly through the hot furnace with sufficient speed to insure that the aluminum is not melted off the terminal end but not so fast as to cause thermal shock.

The furnace heated chamber dimension which the Starbar spans can be the same as the hot zone length of the Starbar as shown in Figure 4. Recommended terminal hole diameters for various refractory walls or plugs and Starbar sizes are shown in Table C. 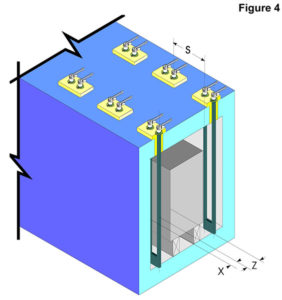 Starbars should not be placed closer than two Starbar diameters to each other or one and one half Starbar diameters to a wall or other reflecting body (from the center line of the Starbar).cross section flange is used to support the weight of the plug and Starbar. The plugs are available in both rectangular and cylindrical cross sections, see Figure 5.

Special higher custom resistance values are available. This is accomplished by machining a smaller spiral width, therefore very high resistance and/or long hot zone lengths are not practical. Lower than standard resistances are not recommended.

There are two type of clamps: Type “M”, manual, (derives its name from its similarity to the letter M) and Type “T”, used with a tool. Please refer to our accessory literature for a detailed part number and description.